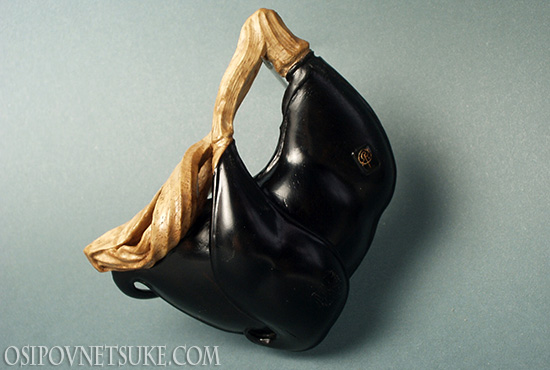 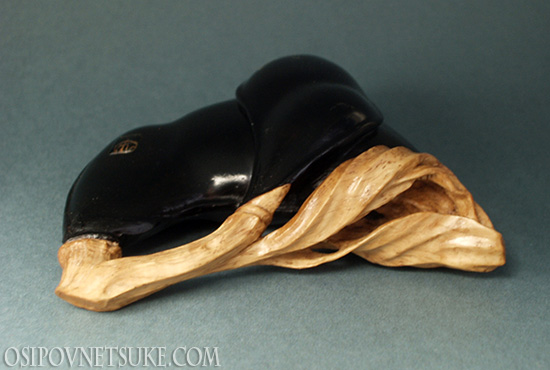 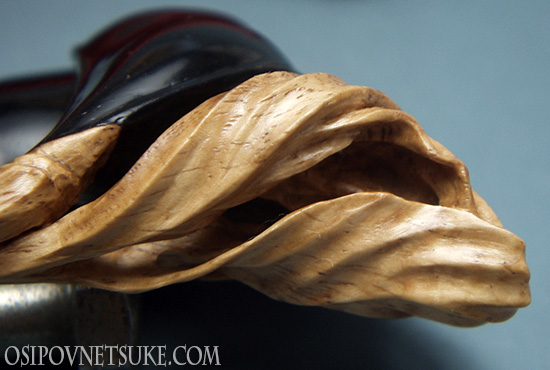 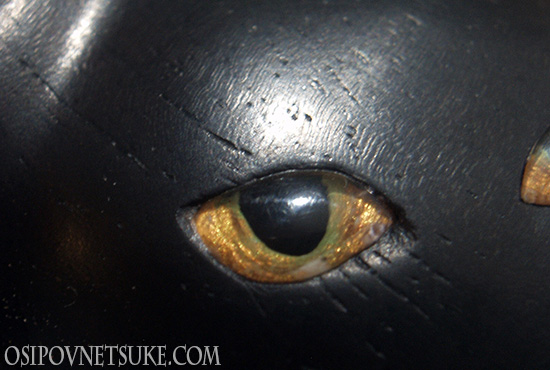 At first, I conceived the bean pods as a symbol of prosperity, health, and of autumn harvest. When the carving had almost been completed I saw that something was clearly missing... So for a long while the netsuke remained sitting on my shelf, waiting to be completed.

I am very grateful to Anatol Ionis (Seattle, USA) for his original thoughts on the subject as they allowed me to find the "missing link". Of course, the bean pods are a symbol of autumn, completeness, ripe harvest, but missing was some symbol of beginning, of conception!

So I added the crescent moon, young and growing, as a symbol of conception and development. Two pairs of eyes - his and hers - are meeting at midnight in their desire to start a new life, yet another symbol of something new and exciting.

Thus this netsuke contains both symbols of the beginning and the end, alpha and omega, and the beginning once again... Causes, effects, and more causes... Everything as it is in our lives. During any moment of time one can see something that starts, and something that ends and brings the fruits of its labors. The process is endless; the circle of life is eternal...

This netsuke is carved from a single piece of African Blackwood (Dalbergia melanoxylon), a gift from my friend and an amazing netsuke carver Janel Jacobson (USA). I used the lighter sapwood for the curled leaves and the dark core for the bean pods themselves. They are integral, made from one piece of wood, not glued together.

The crescent moon and the stars are inlaid with mother-of-pearl from the black-lip pearl oyster (Pinctada margaritifera).

The eyes are inlaid with yellow amber. My signature is on the opposite side, engraved in an amber reserve.