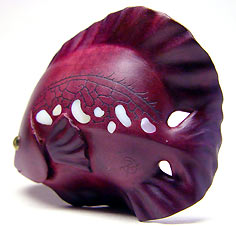 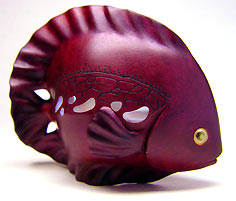 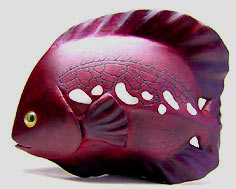 This work is a fantasy. In the "Coral Fish" netsuke, I wanted to show the qualities of unusual and non-typical personality. Such "coral fish" person has bright, catching your eye "coloration". Soft wave of its gently curled infinite fin symbolizes plasticity and adaptability to the surrounding.

Seven mother of perl incrustations on both sides represent seven qualities of such personality (from head to tail): wisdom, alertness, flexibility, imagination ability, modesty, determination, and liveliness. The black engraved pattern above the mother of perl expresses multiple areas of interests and activities. The uppermost engraved branching line stands for diversity of possibilities for growth and self-realization.

Amber is also a magical material. Its golden color is the color of the Sun and color of human aura. Amber eyes of the fish signify ability to see the world as it is.

Although extraordinary person is a "white crow" in a human mass, nonetheless, somewhere in time and space, there is a place, where this person feels like home, like coral fish among the coral reefs. It just has to find these reefs...

Natural himatoshi are created by openings near the tail, and also by gills and mouth. The signature appears in the bottom on the left.